A really unpleasant thing happened to me last year, and the other day, two friends tell me roughly the same thing happened to them, so this appears to be a phenomenon going on. However, I haven’t been able to find any information about this, so I have taken it upon myself to make a blog post regarding…

So here’s what happened. I was standing at the station waiting for my train to take me downtown, when this friendly young Japanese woman approached me, noticing my Pokemon decorations on my bag. She told me she loved Pokemon too, and wanted to talk to me about it and make friends. Suspicious as I am, my alarms did go off a tiny bit, but I figured I’d give her the benefit of the doubt. I’m lonely, after all, and when I tweeted about it afterwards, my friends thought it sounded nice (She did think my Electrode accessory was a Pokeball though, which isn’t really a mistake a Pokemon fan would make). So we exchanged contact information and agreed to meet up a few days later.

And so we met up. She had a friend with her, an older woman, who had a Pokemon accessory on her bag, but said it was a present and she wasn’t really into it; she just liked cute things. We all went to a nearby family restaurant, and I was really excited to make new friends, at least one of whom liked Pokemon! So we sat down by a table and ordered our food, chatting normally and getting to know each other. The pleasant conversation kept going for maybe half an hour.

Then there it came. “Ridi-san, we have something wonderful we want to tell you!” said the younger woman. Then she brought out The Pamphlets. “We want you to come pray with us! It will increase your happiness and your luck!”

My heart sank immediately. They wanted to convert me to their Buddhist sect. I politely told them that that kind of stuff wasn’t my thing, but they wouldn’t take no for an answer; just one prayer, just to try it out! I tried to tell me I already had a religion I followed, but they outright claimed my religion was bogus, and that their was The One for absolute certain. When I asked for proof of this, they said, “It’s not quite there yet, but scientific proof is on the way!” We talked back and forth for a while, not budging from our standpoints. I eventually asked them, “Is this the reason why you contacted me…?” “Well, we want to be your friend, but we also want you to pray with us!”

This kept going for half an hour before I finally shook my head and told them this wasn’t going anywhere, I have to go. I dashed over to the register to make sure I paid for my food first, then excused myself while they were still paying, taking a detour back home to make sure I wasn’t being followed. Then I cried to my mom on the phone for a while.

I don’t remember exactly what their sect was called. My friend who had a similar experience told me it was Nichiren, that might have been it in my case too, but I can’t say for sure. Not that it matters. The similarities of our cases are obvious: My friend was approached by people spotting her anime bags, wanting to talk about anime, setting up a lunch date on a later day, where they revealed their true purpose. Another friend chimed in and said something similar happened to her.

Basically, these sect members will seek out foreigners sporting goods from popular franchises, feign an interest in friendship, and then drop the proselytizing bomb. It’s a cruel, manipulative tactic where they make you think you might have made new friends, actually take time and effort out of your schedule to meet up with them, only THEN to know their true intentions.

You know, Jehovah’s Witness are pretty rampant in Japan as well, but in all my clashes with them, they have at least been honest about their intentions from the get-go, and I cannot believe I’m bringing in Jehovah’s Witness as a lesser of the evils type comparison. What a joke!

I can’t say for certain that everyone who approaches you like this is out to convert you, but it’s not really a thing Japanese people do, so there are many reasons to be suspicious. If you don’t want to blow them off right away, at least straight-out ask them when they first approach you if they might have proselytizing intentions. You don’t want to waste your time on these people! Stay safe out there.

I returned to my home village for the holidays. My pets are staying with my friend back in Japan, so naturally, I felt incredibly roachless when I left them. So along with the recent pet reptile ban lift in Norway, my home village opened this sweet new pet shop, and along with reptiles, wouldn’t you know it? They had hissing roaches! I bought three – the only adult they had left, and two nymphs. Here’s the adult, appropriately named BIG BOY: 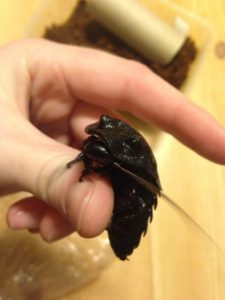 I’ll be bringing him and the nymphs back to Japan with me. There are no restrictions or anything on hissing roaches, and they’re totally fine being stuffed in my suitcase for transport, so that’s exactly what I’m gonna do. I look forward to adding them to my colony!!! 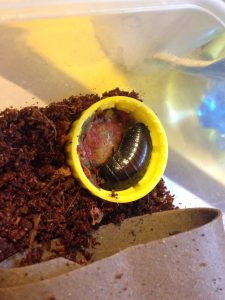 The three of them are currently residing in a Chinese food container with bottle lids as food and water dishes. It’s a little shabby, but it’s a temporary home for three little insects. They’re fine. 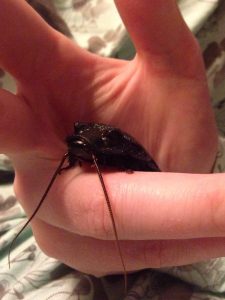 I held BIG BOY the year went from 2017 to 2018 for that extra bug luck. He’s a clinger! Once he velcros himself to you, he won’t let go so easily! People new to roaches might get a little freaked out by this, so I will probably choose a less clingy roach if I ever were to offer bug exposure services.

He’s a very pretty boy. I wonder how old he is. His antennas are completely intact, but he has some battle scars on his side.

After finally having come to terms with Livejournal being no more, Tumblr being horrible for basically anything, and Twitter serving as a pit of random mixed up nonsense with no systemic archives or browsing system, I finally decided it’s time to make a BLOG.

I haven’t actually done any significant web design in like, a decade. The last thing I did was updating my main site with the Finders section, I think. At this point, all the HTML I know is probably obsolete. So thankfully for me, my domain provider, good olde Doteasy had a tool for installing WordPress right there. And thus I bring you blog.swellpage.com! The Swellpage.com blog! The SWELL BLOG!!!

I’m still not entirely sure what I want to use this for. I want to keep it public, so I won’t use it as a super personal diary or anything. Maybe I’ll forget I even made it after this one post. We shall see! Stay swell!!!!!!!!!!

PS: I am keeping the Hello World post for the novelty of it all.

Welcome to WordPress. This is your first post. Edit or delete it, then start writing!